D.O.B: 18/10/2016 Chestnut with Flaxen main and tail Warmblood Filly exp height 16.1 hh
About: Well-handled and very pretty, eye catching filly with correct movement. Has been free jumped and showed a lot of promise for show jumping. Will start her in hand work soon. 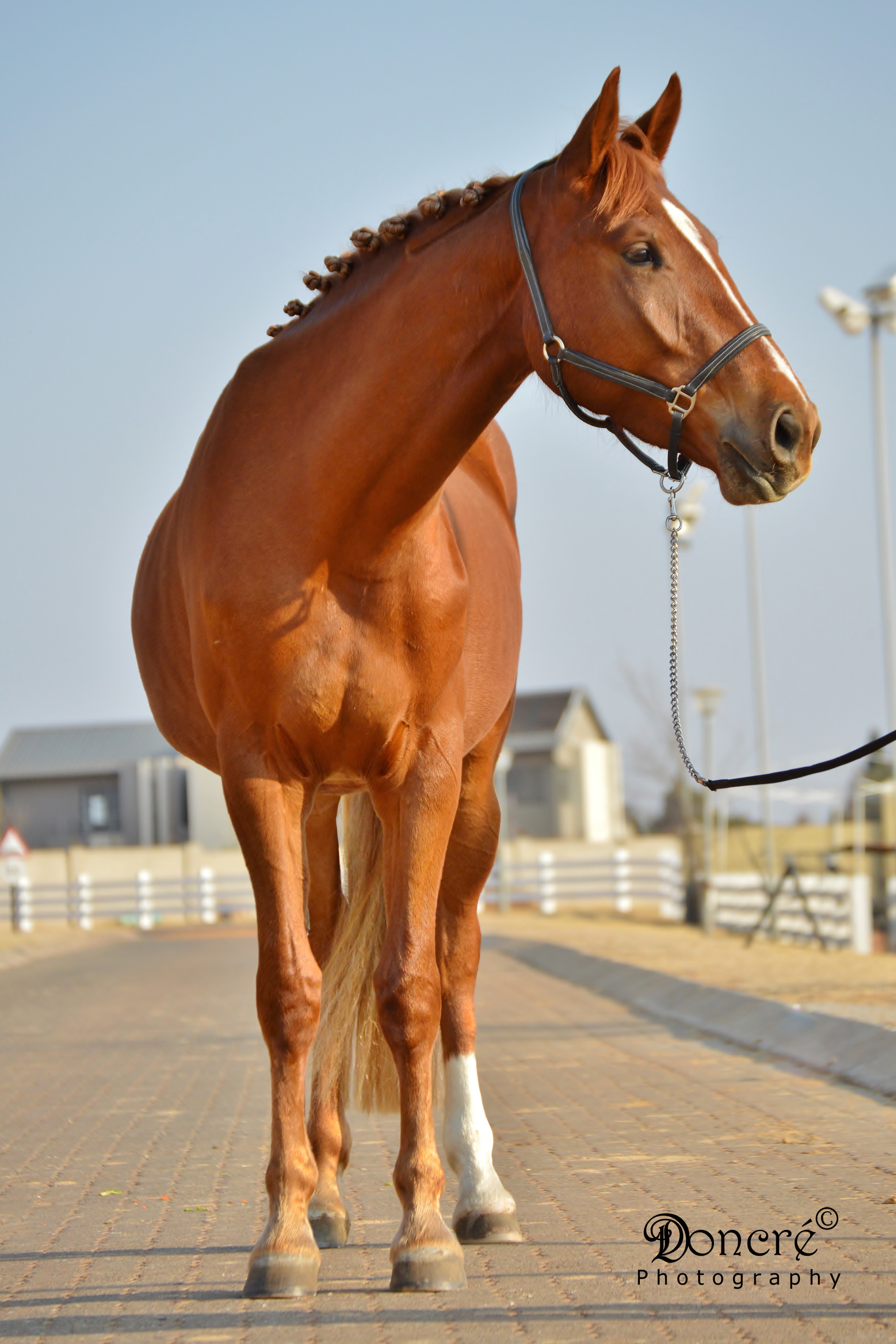 Her sire, American boy, was an imported Coloured Warmblood. He sadly passed in 2019 as he started to jump the 1.30 meter classes. He was graded with the AES in the U.K before he was imported to South Africa and subsequently with the SAWHS.

Ruby’s dam is by Nicola Sime’s Coinnoisseur who at 18 years of age is still at the top of his game jumping in Grand Prix classes.

Coinnoissers sire is the South African breeding legend Consuelo who has been the leading sie of showjumpers for several years now.

Consuelo gives his offspring his wonderful jumping qualities, outstanding movement, good temperament, good type and conformation. The first spectacular breeding success was the licensing of NH Connoisseur (Ruby’s Sire) as a stallion, where the German judge said he would have been licensed at any show in Germany. Again and again Consuelo has produced the winning mare at Namibian licensing, be it a mare of the Kendzia family, Efra Fabella (Ingemarie Plate), Heidis Lovely Girl, Locarno Musica, Locarno Antigone or one of the host of others.

For some years Consuelo stood with Gail Foxcroft in South Africa and produced many successful horses, with many breeders. His offspring excel with top riders. NH Connoisseur and Zonjati El Paso win the biggest events, having won Derby and FEI under their rider Nicola Sime-Riley against imported horses and horses bred by studs with unlimited funding. Voigtskirch Dunmore wins in the 1.40m classes under Hailey Preen. Frischgewaagt Montea goes in the 1.35m classes under Cheny Grytenbach. Seeis Aramis was exported. NH Castro is successful in 1.30m under Charl Kotze. Also in the YHPS you find Consuelo offspring again and again – for instance Zonjati Conquest won the Six-year-old Showjumping class in 2017. As dam’s sire Consuelo produced the winning stallion in Namibia, Heidi Stud Loewenherz who is successful in the 1.35m classes.

Consuelo’s offspring not only excel under top riders but even carry amateurs to success. They truly are spectacular horses and just last year, Consuelo was once again ranked as the top-performing stallion in South Africa. Originally purchased by mistake, Consuelo has to be one of the most important contributors to southern African horse breeding.

Ruby’s Grand Dam, a Thoroughbred mare, was a 1.40m jumper under Brigitte Karels. She only produced Ruby’s dam.