D.O.B: 11/11/2018 Bay Rheinland Filly expt 16.3hh
About: Olive is a very modern and leggy filly. She has good bone and will mature to be a fairly large horse. She has been inspected and pasported with the Rheinland Verband who complimented her on her elasticity in movement and modern type. 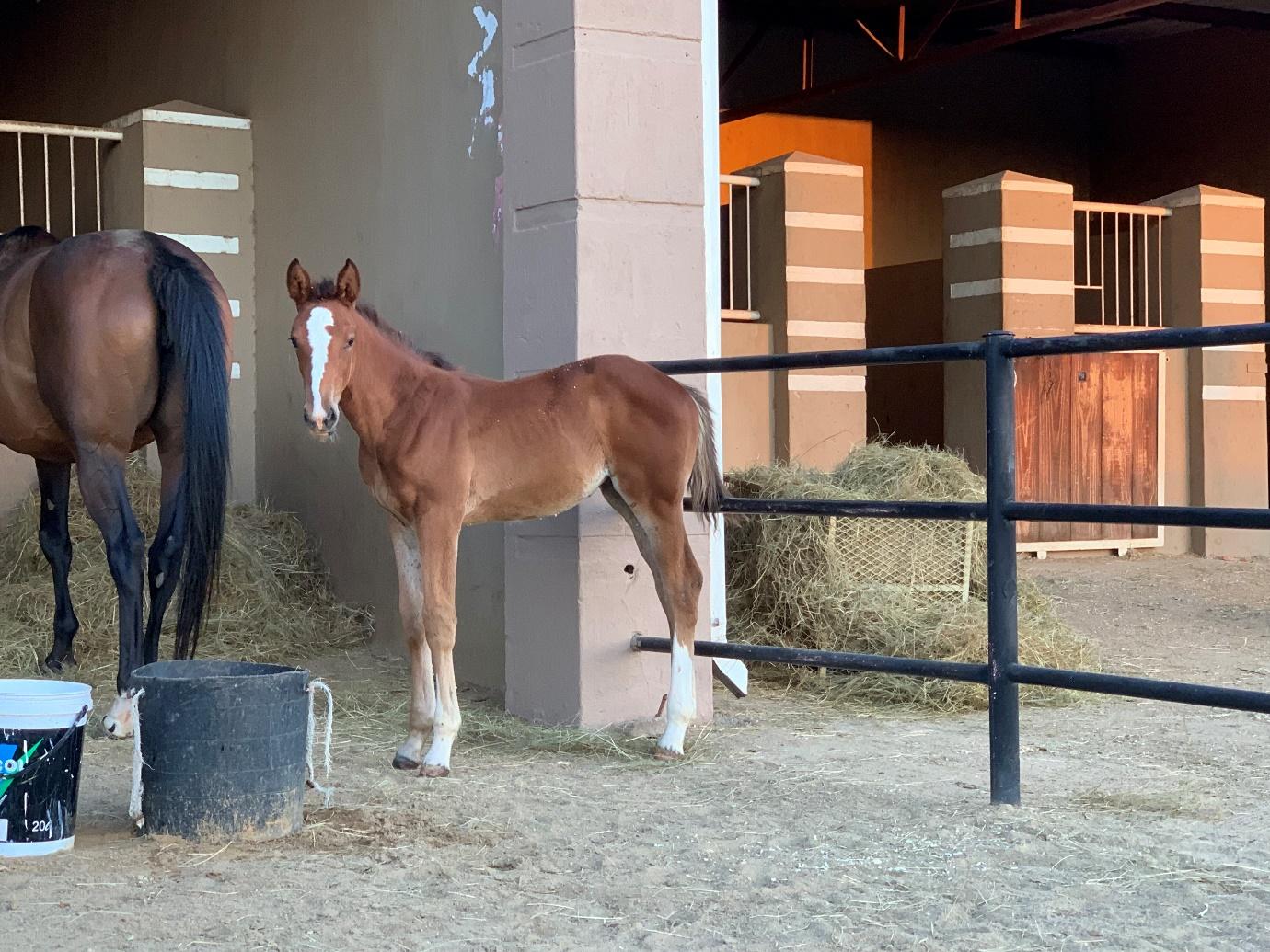 Sire: She is by the BWP Ambassador Stallion, Orlando van de Heffink. Orlando is producing first-rate and competitive offspring such as Lauren Hough’s hot shot mare, Ohlala. Many have won foal championships and have brought record auction prices. Orlando’s Sire, Heartbreaker, is Keur stallion who has produced numerous offspring jumping at the upper levels of the show jumping sport. As well as several approved sons including the 2006 Belgian Stallion Selection Champion Dulf Van Den Bisschop. Heartbreaker is still predominant in today’s breeding and is one of the leading stallions on the Dutch and Belgian jumping indexes. Orlandos Dam’s Sire, Darco, was voted best sire in the world in 2010 for the fourth year in a row, and he has produced over 3000 foals in his breeding career such as the late Sapphire ridden by McLain Ward. His success as a breeding stallion continues today even after his death in 2006. During his show jumping career he made his mark at the Olympics Games, World Equestrian Games and countless World Cups and international events with Ludo Philippaerts. In sport, Orlando had great success with riders Dirk Demeerman and Darrah Kerrins which began during his young horse years in Europe. His resume includes the 2002 6 yr old Belgian Champion, 2nd in the 7/8 yr olds in Aachen, winner of the 2004 CSIO4* 1.50m in Lummen along with many more wins and top five results throughout his career. Orlando is a stallion who expresses big scope, superior technique along with a gentle temperament and is a horse for all riders. These traits are passed along to his offspring and have been proven as successful sport horses throughout the world today.

Her Dam, Declaration G.S, is by Capital Donarco; a stallion who was graded with the SAWBS and that showed a promising career as a showjumper and breeding stallion before his untimely death in 2018.

His sire, Don Cumarco, has really stepped into the limelight under Nicole Horwood. They have broken records by being the first combination to win the South African Derby four times. Capital Don Cumarco has become an icon in the equestrian world, winning numerous 1.50m competitions, including Grand Prix, Triple Crown, SA Champs and World Cup Qualifiers.

One of the most outstanding jumping stallions on the international circuit, Cumano, is the sire of Don Cumarco. Cumano has performed time after time at the very highest level and under Jos Lansink, who memorably won the World Championship in Aachen. As a breeding stallion, Cumano has produced more than a few approved stallions and top-quality sport horses.

We again find the amazing Darco, who produced Don Cumarco’s dam, in Olive’s damline   He has been the number one stallion in the world and has sired many quality stallions such as Parco, Winningmood and Non- Stop, as well as showjumpers competing around the world such as King Darco and Sapphire.

Capital Donarco’s dams sire Lansing was a fully approved and licensed stallion with the Holsteiner Verband, Oldenburg Verband and KWPN. An international Grand Prix showjumper. Lansing was a beautiful grey stallion of very correct type with good movement and extraordinary jumping capacity with the ability to leave these qualities in his offspring.

Declaration’s dam, Shazaan’s Chiquita, is by Capital Capriccio who formally competed successfully in the open classes. His front leg technique is tight and he is very brave, careful and good against the clock. His offspring all have very good temperaments and share his good jumping ability and technique while being very careful and rideable.

His sire, Cor de la Bryere, is one of the most significant foundation sires of the last century who revolutionized Holstein breeding. His progeny were horses with outstanding jumping ability and most importantly, he was a super producer of stallions such as Corrado, Corland, Calypso II and Cordalme Z who have moulded Holstein breeding to what it is today.

Due to his dam's sire, Capitol I, Capriccio has inherited the blood that puts him in an elite league of stallions that are able to produce both outstanding sport horses as well as stallions who in turn, go on to sire top quality offspring. Capital Capriccio's damline, 18b1, is currently the best in the world.