D.O.B 06/11/2017 Bay Rheinland Filly expected to mature 17hh About: Zanotelli has been accepted into the Rheinland studbook and was inspected with them. She has 3 excellent basic gates and with a dual purpose pedigree she will excel in any of the 3 disciplines. Sire: Zenturio is an international grade A showjumper by the Keur stallion Zeoliet out of Wendy a Keur, Preferent, Prestatie mare by the influential throroughbred stallion Apple King out of a Grandioso mare. His sire Zeoliet, who is by Ramiro Z, made an impressive performance test at Ermelo with 9.2 for dressage, 9 for jumping under saddle and 9.5 for free jumping. Zeoliet has ranked at 12th place on the World Breeding Federation Ranking for Showjumping Sires and was recgognized by the KWPN with the award of Keur. 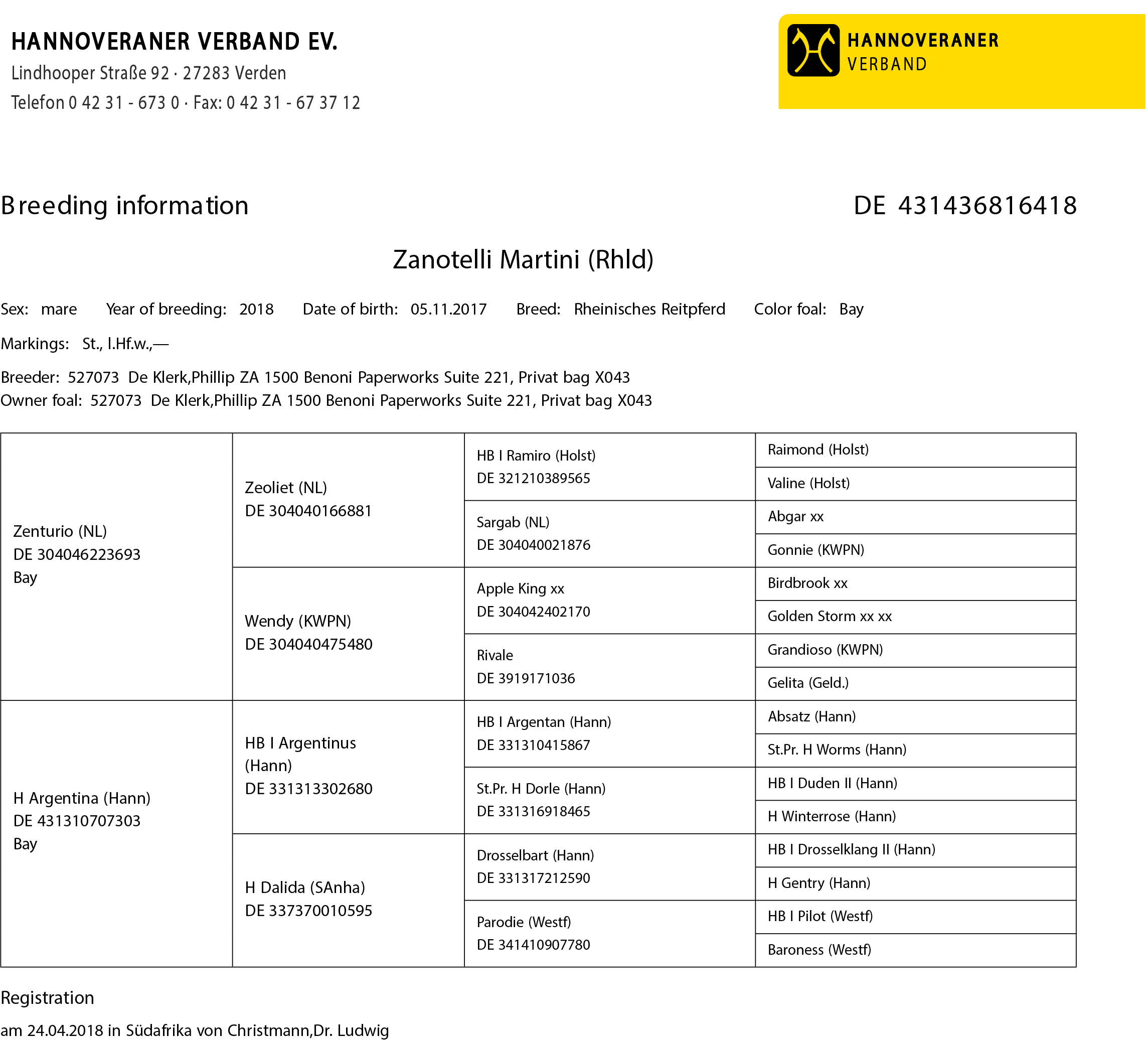 Zenturio’s dam line is highly decorated with his dam, grand dam and great grand dam all being Keur Preferent and Prestatie mares. Zenturo was originally licensed with Sachsen-Anhalt and Berlin-Brandenburg in Germany, he then became a licensed premium stallion with the South African Warmblood Horse Society and later with the AES and Breeders Elite. At his 100 day performance test in Neustadt Dosse he scored Dressage 114.27 to place 9th, Jumping 130.54 to place 4th, finished 4th over all form 41 stallion with an Overal score of 123.97, with several 9’s and a perfect 10. Zenturio showjumped at international grade A level and trained to advanced medium dressage before retiring from compeition sound. He has a brave temperament and a scopy jump, is naturally quick in front and extravagent behind over fences. An elegant and uphil type with a beautiful front he is an impressive and eye catching stallion. His quick jumping hindleg makes him naturally engaged and gives his paces quality and extravagance, he is supple through the back and has an excellent walk with good rhythm and overtrack. He is a pleasure to work with and a kind and friendly horse. Zenturio’s producing qualities are quite remarkable from a very limited number of coverings as 2017 sees the first year he is available by AI in the UK. A convincing improver stallion he has offspring competing at International level in both Showjumping and eventing and winning at advance medium dressage.

Her dam Callaho Argentina was imported as a foal and after a successful breeding career at Callaho Stud one of her daughters have taken over the mantel. One of her offspring, Callaho Latina, was the second price highlight at the 2017 auction and sold for R480,000. She is climbing the grades and currently competing successfully in the 1.20m.

By 1996, Argentinus was the youngest millionaire among Germany’s top sires and he remained a top sire right up until his death in 2007. A successful advanced level jumper himself, Argentinus produced both jumping and dressage competitors and stallions.

His progeny include over 20 approved stallions, including the stallion performance test winner and Vechta price record breaking, August der Starke (sire of Victoria Max-Theuer’s Grand Prix dressage horse, Augustin) and numerous State Premium Mares, many of which have proved themselves on a national level.