D.OB: 30/10/2013 Bay SAW Mare 17hh
About: Declaration is a very modern long lined mare, she has 3 expressive gates and a wonderful jump. Time has been taken in producing her due to her size. She has competed Novice Dressage and is only just starting to be competed in Showjumping. With her great work ethics and quick learning she will be suited to an amateur or professional wanting to take a young horse through the grades. She is bred in the purple for show jumping with names like Cumano, Darco, Lansing, Contender, Cor de la Bryere and Capitol I. Declaration has also been inspected and accepted into the Rheinland Verband studbook and has produced a filly foal by Orlando. 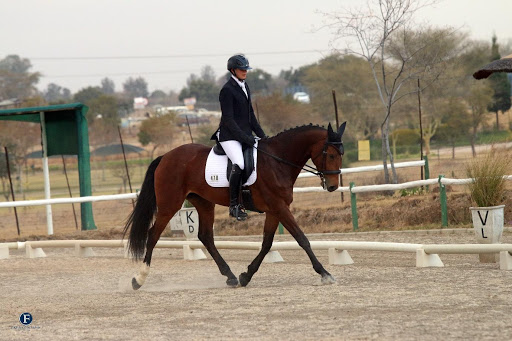 Her sire is Capital Donarco; a stallion who was graded with the SAWBS and that showed a promising career as a showjumper and breeding stallion before his untimely death in 2018. His sire, Don Cumarco, has really stepped into the limelight under Nicole Horwood. They have broken records by being the first combination to win the South African Derby four times. Capital Don Cumarco has become an icon in the equestrian world, winning numerous 1.50m competitions, including Grand Prix, Triple Crown, SA Champs and World Cup Qualifiers. One of the most outstanding jumping stallions on the international circuit, Cumano, is the sire of Don Cumarco. Cumano has performed time after time at the very highest level and under Jos Lansink, who memorably won the World Championship in Aachen. As a breeding stallion, Cumano has produced more than a few approved stallions and top-quality sport horses. The stallion who was given the title of BWP Ambassador, the amazing Darco, produced Don Cumarco’s dam. He has been the number one stallion in the world and has sired many quality stallions such as Parco, Winningmood and Non- Stop, as well as showjumpers competing around the world such as King Darco and Sapphire. Capital Donarco’s dams sire Lansing was a fully approved and licensed stallion with the Holsteiner Verband, Oldenburg Verband and KWPN. An international Grand Prix showjumper. Lansing was a beautiful grey stallion of very correct type with good movement and extraordinary jumping capacity with the ability to leave these qualities in his offspring.

Declaration’s dam, Shazaan’s Chiquita, is by Capital Capriccio who formally competed successfully in the open classes. His front leg technique is tight and he is very brave, careful and good against the clock. His offspring all have very good temperaments and share his good jumping ability and technique while being very careful and rideable.

His sire, Cor de la Bryere, is one of the most significant foundation sires of the last century who revolutionized Holstein breeding. His progeny were horses with outstanding jumping ability and most importantly, he was a super producer of stallions such as Corrado, Corland, Calypso II and Cordalme Z who have moulded Holstein breeding to what it is today.

Due to his dam's sire, Capitol I, Capriccio has inherited the blood that puts him in an elite league of stallions that are able to produce both outstanding sport horses as well as stallions who in turn, go on to sire top quality offspring. Capital Capriccio's damline, 18b1, is currently the best in the world.